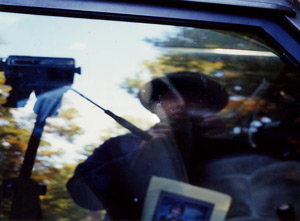 Evan Izer
Gettysburg, Pennsylvania
The Civil War
Shooting super 8 film along a road near the Gettysburg battlefield. I must have shot 100 reels that year. It was all about the filming, never the film, although I plan to use all of that footage in a film tentatively titled "In Between". The story of my late adolescence.
It was a lovely day. The tripod on which my Super 8 camera rests was purchased that morning. I forget whose car that was.
During this time, I constantly wore a brown beaver hat from the 1920's which can be glimpsed upon my head in this picture.
I always wanted this shot to be my publicity self-portrait for filmic projects.
In the bottom center of this picture, you can faintly see a photograph in the front seat of the car. This is an ad for American Airlines from 1980, and features a stew named Vickie Getz. I and my friends from high school called her "the 80's lady". I don't know why she so obsessed me. In retrospect, she was my first "meme". I don't remember why she accompanied us for the shoot, but she often travelled with us. Even to Paris. She's still around.
⇦ go back to that other thing | surprise me | tell me more ⇨