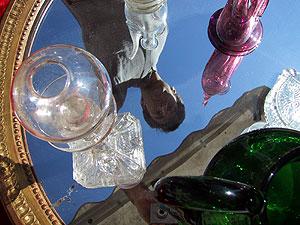 Karl Dubost
Valbonne, France
Grapes of Wrath
« The music stopped in the restaurant and a man's voice spoke from the loudspeaker, but the waitress did not turn him off, for she didn't know the music had stopped. Her exploring fingers had found a lump under her ear. She was trying to see it in a mirror behind the counter without letting the truck driver know, and so she pretended to push a bit of hair to neatness. The truck driver said, "They was a big dance in Shawnee. I heard somebody got killed or somepin. You hear anything?" "No," said the waitress, and she lovingly fingered the lump under her ear. »